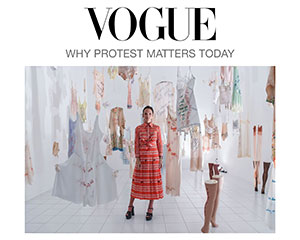 Zoë Buckman writes for British Vogue. She comments on being a Londoner in New York at a time of great political turmoil and being an artist with a feminist viewpoint who wants to make her voice count.

Here is a brief excerpt from Why Protest Matters Today:

Since emigrating from London in 2007 I have sought out the activists and advocates and artists endeavouring to inspire critical thinking and raise consciousness, however, I’ve often been confronted with the fact that we have been a small piece within a jigsaw of apathy… until now. I have never known America to be this alive with political thought, debate, action, enthusiasm and solidarity before. It is a horribly important time to be an American. People are awake. Perhaps they are awake for the wrong reason, and it shouldn’t have taken Trump’s win to burst their bubble, but it doesn’t really matter now does it? Because we’re in a new world and the only answer is to stand together and act, relentlessly.”

Read the interview in its entirety here.