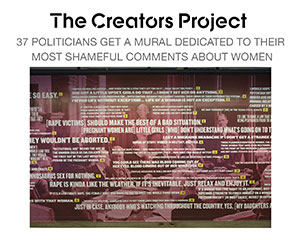 Here’s a brief excerpt from the article “37 Politicians Get a Mural Dedicated to Their Most Shameful Comments About Women”:

During the 2016 presidential campaign, audio surfaced of then-presidential hopeful Donald J. Trump telling Billy Bush that his celebrity status allowed him to “grab” women “by the pussy” at will. The revelation sent shockwaves around the country, but for artists Zoë Buckman and Natalie Frank, it was yet another line in an all-too-familiar history of disgusting comments made—on the political level—against women. The shameful sound bite inspired a new, 30-foot long mural titled, We Hold These Truths To Be Self-Evident, now on view at New York Live Arts, that makes art out of quotes from nearly 40 politicians who have, for decades, made odious public remarks about women’s bodies and rights.”

Read the article in its entirety here.