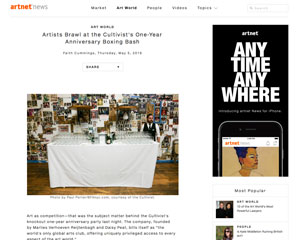 Art as competition—that was the subject matter behind the Cultivist’s knockout one-year anniversary party last night. The company, founded by Marlies Verhoeven Reijtenbagh and Daisy Peat, bills itself as “the world’s only global arts club, offering uniquely privileged access to every aspect of the art world.”

Read the article in its entirety here.