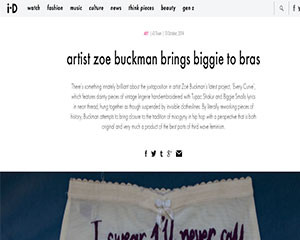 i-D Magazine caught up with British artist Zoe Buckman to get an insider’s take on her on-going artwork, Every Curve.

Every Curve focuses on the female form through the conformity of vintage lingerie with the words 90’s rap lyrics from popular artists such as 2Pac and Notorious B.I.G. sewn into them.

Take a read of this excerpt from i-D’s article, “Artist Zoe Buckman Brings Biggie to Bras“:

There’s something innately brilliant about the juxtaposition in artist Zoë Buckman’s latest project, ‘Every Curve’, which features dainty pieces of vintage lingerie hand-embroidered with Tupac Shakur and Biggie Smalls lyrics in neon thread, hung together as though suspended by invisible clotheslines. By literally reworking pieces of history, Buckman attempts to bring closure to the tradition of misogyny in hip hop with a perspective that is both original and very much a product of the best parts of third wave feminism.

Buckman, raised in “the flavour” of East London, and now living in NYC’s East Village, is, in the academic sense, a liberal artist. Using materials from concrete to lingerie, her work challenges our acceptance of contradictions by synthesising them. Having just dealt with a high concept in Present Life, an exhibition exploring the transient nature of time (opening at Garis and Haan Gallery on February 25), Buckman was drawn to a personal source of conflict: her love of hip hop as a feminist. “I want to reduce the stigma of the word ‘feminism,'” she says. “It’s not about eliminating and excluding. You can be yourself and still be a feminist.” Selected pieces from Every Curve are displayed in a group show, “What Is, Isn’t,” at Alan Koppel Gallery in Chicago until the end of October.

You grew up in East London, and I read that your childhood was very influenced by rap and feminism. How was that?

Read Zoe’s answers to i-D Magazine’s questions plus the rest of the article at i-d.vice.com